Ah, the annual desert pilgrimage to see the latest and greatest in electronic gear and gizmos that is the Consumer Electronics Show (CES) has come and gone yet again, leaving in its' wake a trail of visitors overwhelmed by the sheer spectacle of tech.  While it's easy to get lost in a sea of show reports, this one takes you through a number of developments all relevant to the serious photographer. 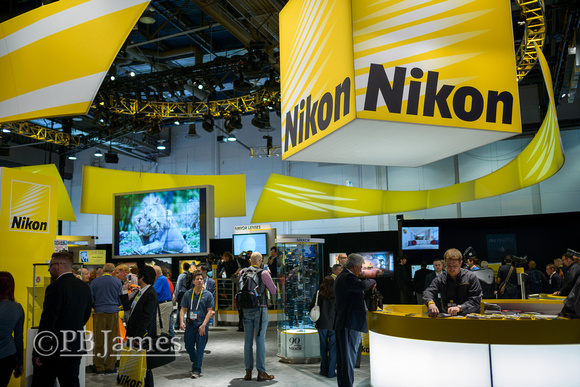 As a primarily Nikon-based photographer, I was keenly interested to see one of the company's most recently announced products, the Nikkor 300mm f/4 PF VR Lens.  The lens is a stunning upgrade to the previous model, as it adds an active stabilizer (Nikon's VR system), and a high-performing anti-glare coating (Nikon's Nano-coating), while drastically reducing the weight and size through the use of Phase Fresnel optical technology, a first in Nikon’s interchangeable lens systems.  The lens weighs only 1lb 10.6oz (755g) as compared to the 3lb 2.8oz (1440g) of its’ predecessor, and the length also diminishes, from 8.8in (222.5mm) to 5.8in (147.5mm).

The new 300mm f/4 VR when in-hand is remarkably small for a high-performing telephoto lens, significantly less cumbersome than the Nikon 14-24 f/2.8 wide-angle lens I frequently carry, and balances well on a mid-sized body like the D810. I initially wondered how difficult the lens might be to keep stable, given its’ combination of long focal length, and light/compact body, however those fears were quickly dispelled as I captured sharp shots across the hall.  The lens showed the excellent focus speed, optical quality one expects from a top-level Nikon lens, and I was only able to spot a couple of instances where the bokeh looked anything but perfectly smooth, shooting into some unusually-shaped lights.  Nikon wouldn't permit take-away samples shots.

Overall, this lens looks like a home run for Nikon, as the 300 f/4 with VR has been a long-awaited update for many, and Nikon’s surprise bonus of enormous size and weight savings through the use of new lens elements makes it a lens that more photographers are likely to carry and use in more situations.  In my book, the size is the most significant improvement, as the older 300 f/4 was simply too large to fit into my kit, this new version would be right at home, even on long-distance hikes.  The lens is slated to appear in stores in early February, with an MSRP of $1999.

Another lens I that piqued my interest is the new Nikkor 20mm f/1.8 G, a fast-aperture ultra-wide prime lens that doesn't break the bank ($699 MSRP) or back (12.6oz or 355g).  The lens struck me as a great potential complement to the aforementioned 14-24, offering easy filter compatibility with its' 77mm threads, and trading a faster maximum aperture and more compact build for the flexibility of the zoom.  Shots were quite sharp, even wide open, with nice, soft out-of-focus rendering for a wide-angle lens.  Interestingly, the same aperture blades that were well rounded when opened widely, when stopped down produced harsher, heptagonal bokeh, but also allowed for sensationally sharp sunstars when shot against the light (with nary a trace of flare).  All-in-all, a very impressive lens in a very reasonable package, one I look forward to using in the future. 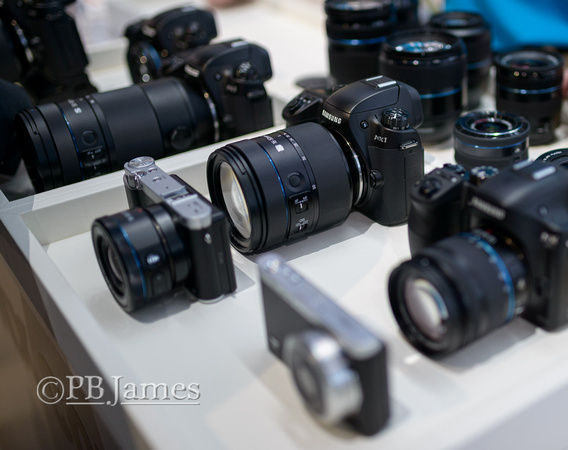 At this point it’s likely we all either use or are familiar with Samsung products, but few know the Korean giant’s interchangeable lens camera systems.  This should start to change soon, as Samsung’s NX (1.5x crop, APS-C size sensor) and NX Mini (1” sensor) start showing up in more retailers and likely in more camera bags and pockets soon.

The NX1 is Samsung’s newest, top-of-the line DSLR-like mirrorless camera in their NX line, and it runs an all-new operating system as compared to past models like the NX20 and NX30. It also features an all-new Samsung-fabbed 28 megapixel sensor (currently the highest MP count on an APS-C sensor), and a revamped physical layout and controls.  I didn’t much care for the ergonomics and control scheme of past Samsung cameras, but the new software and controls of the NX1 really changed my mind, as I no longer felt lost in endless menus trying to find basic options, and the touchscreen enabled easy option changes not available on physical controls.

The Samsung NX lens line continues to grow, adding a 50-150mm f/2.8 telephoto zoom to last year’s 16-50 f/2.0-2.8 standard zoom in their top “S” line.  On the NX1 these two lenses deliver the quickest autofocus response I’ve seen on any mirrorless camera, along with sharp results and relatively smooth out-of-focus areas.  Samsung featured their entire lens line in the NX area, including a fast, sharp 300mm f/2.8 lens, and their intriguing lineup of pancake lenses (16mm f/2.4, 20mm f/2.8, and 30mm f/2.0).  As with other mirrorless systems, focus speeds varied from lens to lens, with some, like the 60mm Macro, being quite sluggish, even on the NX1.

Also intriguing was the NX Mini, a very small (think iPhone 6) sized interchangeable-lens camera based around a 1” sensor.  Samsung currently offers it with a 9-27mm f/3.5-5.6 zoom lens (24-72mm full-frame equivalent), and more interestingly with 9mm f/3.5 and 17mm f/1.8 prime lenses (24mm and 46mm equivalents respectively.  Focus performance was reasonably good, and more importantly, low-light JPEG performance from the 20.5MP sensor bettered what I’ve seen from other 1”-sensor models like Nikon’s 1 system and Sony’s RX100 series, possibly due to Samsung’s improved image processing seen on recent devices like the Galaxy Note 4.  With a couple more tiny prime lenses, the Samsung NX mini could be an extremely compelling device for photographers wanting to pack ultra-light and not sacrifice too much creative control.

Overall, Samsung’s advancements in photography are quite compelling, and with updates to improve focus speed on some lenses, and filling out the lens line with missing lenses (fast 85mm, 35mm equivalents, faster ultra-wide prime or zoom, among others), the NX system should start garnering real attention and use from more and more serious photographers.  The NX mini also holds great promise for some niche uses, and as a go-anywhere companion, and I’m hoping that Samsung sees the promise and continues to expand the line.

In the next portion of this report, I’ll cover some other interesting cameras and gear from the likes of Panasonic, Wacom, and more!